The Story of Christmas FM

Whether your festive plans include Rockin’ around the Christmas Tree with Brenda Lee, dreaming of a White Christmas with Bing Crosby or serenading your loved one with Mariah Carey, there’s only one radio station that has it all.

But while you’re used to simply tuning your dial to Christmas FM every November, have you ever taken a moment to think about how and where it all started?

It was a dark and stormy night and folk could tell that there was something brewing in the air…..

Nah, just kidding. It was actually a balmy August evening when four (sort of) wise men sat down over a few drinks and kicked around the idea of starting a radio station dedicated specifically to the most wonderful time of the year!

The year was 2008 and the mission was simple – to provide a family-friendly radio station that celebrates all things Christmas.

After more discussion it was decided that, as well as providing the feel-good factor in the lead up to the festive season, Christmas FM’s philosophy would also include raising awareness and funds for a charity partner.

Very often, many of us donate money to a good cause but don’t actually stick around long enough to find out what our money actually does. Christmas FM promised to inform people of where their donations would go if they took the time and effort to contribute to its annual cause.

So, the guys had their mission statement. Unfortunately, it was then time to get down to brass tacks – how were they going to pay for it?

Enter the wonderful sponsors that have supported the station down through the years – EBS, Coca-Cola, Cadbury, An Post and more. They have done the crucial job of covering the operational costs so that the creative team get on with what they do best – bringing the magic of Christmas to listeners all around the world.

So, in summary, the sponsors fund the station, the team provides the tunes and the listeners fund the charity campaign! Simple, right? 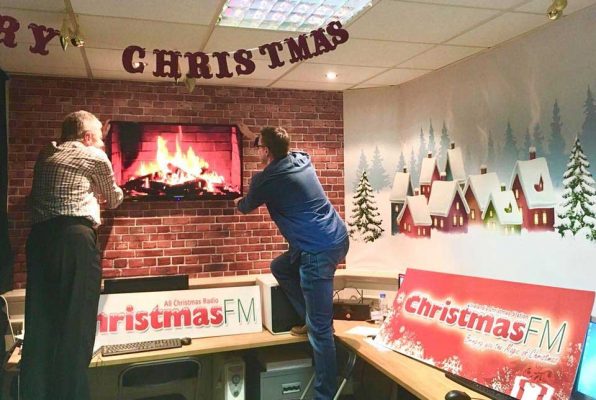 Although, let’s be clear. When it started, Christmas FM was not the global phenomenon it is today. In fact, for its very first year, you could only listen to it in the Dublin area!

After that initial discussion in August, there was only three months to a potential launch of their yuletide vision and an even narrower window to apply for a broadcasting licence. In other words, the pressure was really on.

There were also the not-so-small practicalities of sorting out studio premises, outfitting, equipment, staff, financing and all the other necessities that come with launching a radio station. Oh, and did we mention that this was 2008 and the country was in the grip of an economic downturn?

Despite the many, MANY challenges, not to mention the limited timeframe, Christmas FM launched on November 28th from the Clyde Court Hotel in Ballsbridge on 89.9FM in Dublin. And guess who was at the press launch? None other than Shakin’ Stevens himself! Merry Christmas Everyone, indeed.

The organisers were also thrilled to have the station’s costs provided by Top Gifts who, to be fair to them, took a punt on a completely unknown entity. On-air and behind-the-scenes staff were recruited from across the DJ and radio industry who were eager to get behind the station’s first charity partner, Childline (ISPCC). 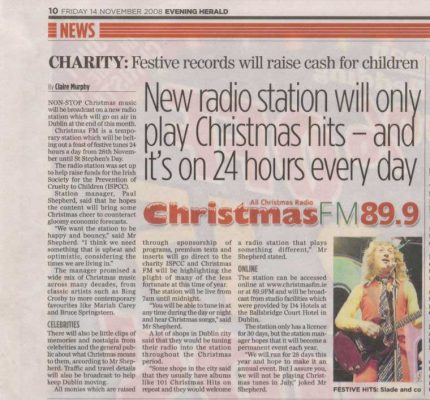 At the end of that first licence run, €35,000 had been raised via the textline and donations made by Christmas FM listeners. And so, it was with a mixture of relief and regret that the exhausted team signed off that year on December 26th.

Little did they realise that this was to be the first step on a journey that has now brought the station to where it is today and has raised millions for charitable causes.

Click here to see exactly how much money was raised each year for different charities over the course of the station’s history.

If you’ve ever wondered how the playlist for Christmas FM is decided, wonder no more.

At the start, there was quite a strict approach to the format and music content on the station. Of course, there is a vast catalogue of Christmas music available (The Christmas Song alone has over 600 versions, for crying out loud!), and the presenters were conscious that people would be expecting the traditional favourites.

However, to avoid listener fatigue, these could not be recycled endlessly, no matter how many times they were requested!

And so, less mainstream songs were added to the playlist to give the station a unique edge over any others who were limited to playing certain hits over and over again.

Having said that, despite more and more music being added over the years, the core list has essentially remained the same.

Every year sees a few new numbers come to the fore but the perennial favourites like All I Want For Christmas Is You, Fairytale of New York and Last Christmas still dominate the list of most-loved songs.

On a side note, one song that still divides the station’s listeners (and presenters!) is Christmas Shoes.

It’s a Marmite song – you either love it or you hate it! Have a listen and let us know what you think…

Some surprising hits have surfaced over the years such as The Christmas Can-Can from Straight No Chaser, which was introduced by Christmas FM’s late colleague, Jim Kenny.

We’ve also been lucky enough to have the likes of Noel McCaul, Hugh Browne, Bob Gallico grace our airwaves before departing this world for the big broadcasting studio in the sky.

But, it has to be said that it’s the unwavering love from listeners of all ages for crooners like Frank Sinatra, Bing Crosby, Nat King Cole that inevitably prompted the team to launch the digital station ‘Christmas FM Classics’.

Similarly, after receiving requests for carols and classical renditions of festive favourites, ‘Christmas FM Classical’ was also given its own online home.

Have a listen. Trust us, it’s the most chilled out you’ll be all month!

Apart from the music, the thing that makes Christmas FM so special is the exceptional presenters, broadcasters and workers who give up their free time and volunteer alongside the core management team and staff at the station during the busiest time of the year!

Many are, or have been, professional broadcasters on national, local and community radio shows. However, what you might not realise is that, for every voice heard on air, there are probably three times as many volunteers behind the scenes.

In fact, the volunteer rota now exceeds 100 individuals who are involved in research, production, news, traffic, promotions, social media and other areas!

Without their dedication, Christmas FM simply would not happen. 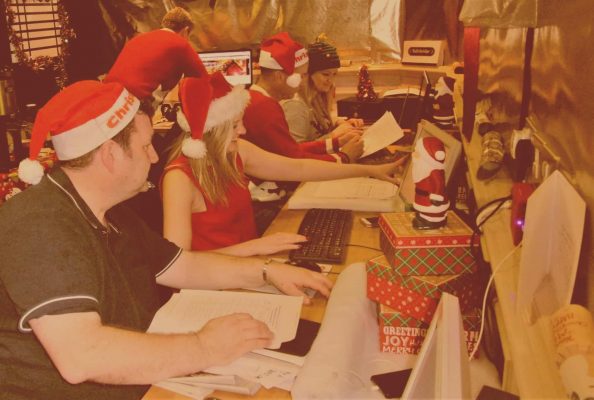 Did you know that during the ‘quiet’ time of the year, the station operates radio production/media training courses which are open to any member of the public?

The main point of these courses is to identify future talent for the Christmas FM family and has proven very successful, with a number of students becoming presenters on the digital channels before transitioning to the main station.

Others have contributed behind the scenes by conducting interviews, producing audio inserts and editing content.

If you fancy finding out more about how the station works and think you have what it takes to be a Christmas FM presenter, click here for more information!

WHERE WE ARE NOW

From humble and hasty beginnings in 2008, Christmas FM has gone from strength to strength, establishing itself firmly in the hearts and minds of Irish people, both at home and abroad.

Thankfully, the overwhelming combination of positivity, generosity and joy produced by the station meant that the original intention of a one-off Dublin-serving Christmas station would never be enough for eager listeners who quickly spread the love for Christmas FM around the country.

Today, as well as the traditional FM service, the station has put huge effort into developing its digital footprint which now encompasses a number of online stations, a website, apps and social media.

It has played host to Irish celebrities like Nathan Carter, Deirdre O’Kane, Imelda May, Brian O’Driscoll, Jedward, Dustin the Turkey, Frank Kelly (aka. Fr. Jack) and many, many more!

With twelve transmitter sites throughout Ireland, and a permanent home at the Ballsbridge Hotel in Dublin, the sky’s the limit for the little station that reminds us all of the true meaning of Christmas.

Christmas FM’s 2015 fundraising campaign breaks all records by raising over a quarter of million euro for children’s charity  Make-A-Wish...

Why Does Rudolph Have A Red Nose?

The Toys of Christmas Past – Did Santa bring these to you?